If I had to choose only one food to eat for the rest of my life it would be bread, hands down. The anticipation of a slice of good toast gets me out of bed in the morning. I actually get excited about the prospect of crusty bread dipped in olive oil and balsamic. The smell of fresh bread baking is the ultimate comfort. I love bread of all types… crusty artisan loaves, plain white homemade bread, baguettes, foccacia, tortillas, pitas, and I’ve learned to make them all. Undoubtedly this factor has contributed to the the few extra pounds I lug around.

I try to eat reasonably healthy, so I only make white breads as a treat now and then. Multigrain bread has become my go-to recipe. Surprisingly, it wasn’t an easy recipe to settle on. My first several attempts at making a multigrain bread resulted in loaves that were overly dense, didn’t rise well. They also tasted a little too much like granola and didn’t really satisfy my cravings. Unable to find a recipe that really worked for me, I decided some experimentation was in order. What I finally settled on was an adaptation of a recipe in my favourite book of all time, The Joy of Cooking. That recipe for Cracked-Wheat Bread actually suggests trying other cereals, so try them I did. What I ended up with is a recipe that I’ve been using for years. 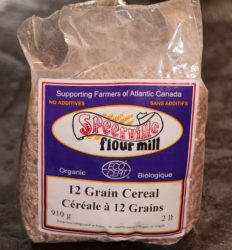 I like to use the 12 Grain cereal from Speerville Flour Mill in this bread. If you don’t like a bit of crunch you can throw the cereal in a food processor and whiz it for a sec. Don’t make it too fine or the bread will become heavy. I also have the luxury of using my own fresh raw goat milk and our old-fashioned maple syrup, cooked over a smoky fire. I think both these ingredients give the bread a little something special.

Get your hands in there

Patience is definitely a virtue with this recipe. Getting the amount of flour in the bread exactly right is an art, not a science. Not quite enough flour and this bread sinks when it bakes. Too much flour and it has a hard time rising. The dough must be soft, but not at all sticky. If you use a mixer to knead it, be sure to take it out and knead it a few times by hand before starting the rise. Only by working the dough with your hands will you truly get a feel for the proper consistency.

Although this bread is a little on the tricky side to make, it’s worth the effort to master. It’s one of the best all-purpose breads I’ve found, equally suited to breakfast toast, sandwiches, dipping, or just eating slathered in butter. It has a good constitution, it’s light and nutty, and it freezes well.  It also has a decent shelf life, not that it will last long. I usually put away 1/2 loaf as soon as it comes out of the oven. What can I say? I’m addicted.

Print Recipe
The Best Multigrain Bread Ever
A well-rounded grain-filled loaf suited to any meal. 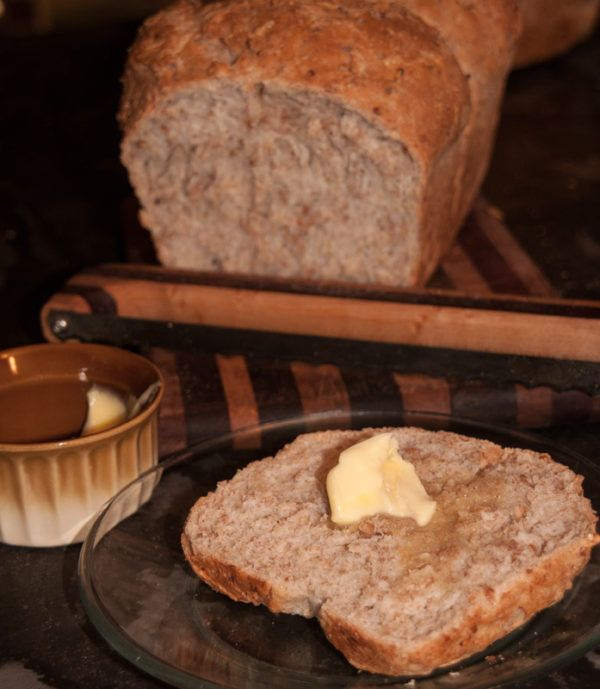 This is my story (and I’m sticking to it)

My name is Sue (aka The Tipsy Toad). A few years ago I gave up a university job with a pretty decent paycheque for the opportunity to spend my days digging in the dirt and raising animals as a small-scale farmer. I am passionate about food security, food sovereignty, and eating, so growing ethically raised and sustainable food seemed like a good thing to do with my mid-life crisis. I have a background in photography, I freelance as a writer, and I'm a self-taught cook and farmer. Git in mah belly!